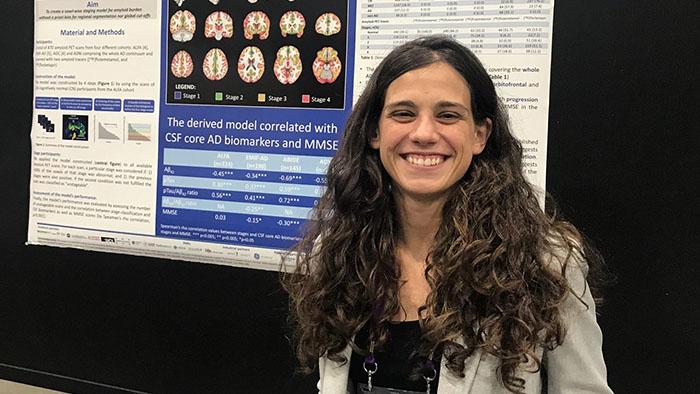 Gemma Salvadó, researcher at the BarcelonaBeta Brain Research Center (BBRC), has obtained her PhD with her thesis ‘Detection of early cerebral amyloid-ß deposition by PET imaging and its downstream effects’, defended online on July 9th.

She joined the BBRC Neuroimaging Group as a pre-doctoral researcher in 2017, under the supervision of Juan Domingo Gispert and José Luis Molinuevo, and the tuition of Roser Sala of the University of Barcelona. Prior to her doctorate, she obtained a master's degree in Biomedical Engineering and a degree in Physics.

Let's learn more about her thesis and experience working at the forefront of Alzheimer’s prevention research.

What is your thesis about?

My thesis focuses on two main points relating to the study of the preclinical stage of Alzheimer’s. In the first instance, we focused on detecting the Beta-amyloid protein, which is one of the first to accumulate in the brain in Alzheimer’s disease, very early on. In this way, we can identify people who are at increased risk of developing Alzheimer’s disease in the future. In the second part of the thesis, we used the detection of this protein to investigate other possible mechanisms that are triggered in relation to amyloid accumulation.

Your research has been based mainly on data obtained from the Alfa Study, launched in 2013 by the Pasqual Maragall Foundation and the BBRC, with the support of the “la Caixa” Foundation. What would you say to participants and collaborators who make it possible?

THANK YOU, THANK YOU, THANK YOU! The Alfa project has been key in the development of my thesis as it focused on the very early stages of the disease, which can only be done in studies in which participants are cognitively healthy. However, the weight of the project goes far beyond my thesis. The Alfa project is known worldwide in the field of Alzheimer’s research, and this is due to the quality of the project and the exceptional dedication of the study participants.

In the last four years, I have been lucky enough to meet leading researchers in the field of Alzheimer's and I would like to give evidence of how recognized and appreciated the project is in these areas. I think a titanic effort is being made to understand Alzheimer’s disease in its early stages, with the Alfa Study but also with similar projects in other parts of the world; and without any doubt, this knowledge will be crucial to be able to develop future therapies against Alzheimer's.

During these four years you have had the opportunity to meet researchers from all over the world, and even to stay at the UMC Amsterdam University Hospital in the Netherlands. How was your experience in both Barcelona and Amsterdam?

The experience has been very enriching both professionally and personally. Within the BBRC we are fortunate to be in close contact with multiple research centers both in Europe and in the rest of the world. In my opinion, this fact is absolutely indispensable for doing meaningful, innovative and cross-cutting research. Collaboration between groups is something intrinsic to science and necessary to be able to move forward. For example, in the case of my time at Amsterdam UMC, we conducted a study that included data from both centers. This allowed us to investigate with participants who already had some cognitive symptoms as well, and in this way we were able to generalize our findings to the entire continuum of Alzheimer’s disease. I think that these types of experiences are very valuable, as they allow the creation of a network between different researchers, especially in the case of young people, which promotes joint work that ends up leading to greater results than a sum of independent projects.

What are your future plans?

My project right now is to continue in the field of research, and more specifically, in the field of Alzheimer’s. That's why I'm going for a season to do a post-doctoral stay in another group in Europe. My intention is to be able to learn new ways of working and make a network of collaborators even more extensive. And in the more distant future, I hope to be able to come back and bring all this knowledge to continue researching at home.