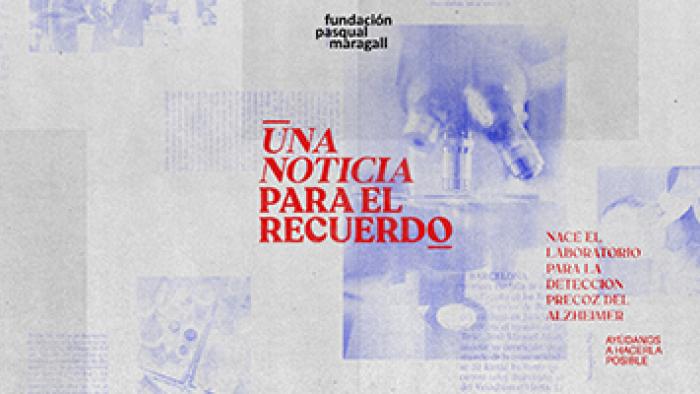 The Barcelonaβeta Brain Research Center (BBRC), a research center of the Fundació Pasqual Maragall, has begun the construction of a laboratory dedicated to investigate new biomarkers that allow diagnosing the initial stages of Alzheimer's in blood. The final objective of the project is to be able to detect the disease with a blood test, a less invasive and expensive diagnostic test than those used today, and thus improve the chances of success of treatments focused on stopping this pathology. The creation of the laboratory supposes the materialization of one of the lines of research of the Biomarkers in Fluids and Traslational Neurology group, headed by Dr. Marc Suárez-Calvet.

The new laboratory, leader in Spain, will focus on the development, validation and application of biomarkers characteristic of the beginnings of the biological process of Alzheimer's. Finding these biomarkers will make possible to place the diagnosis of the disease in a phase prior to the manifestation of the first symptoms, when brain damage is already notable and irreversible, and thus propose effective preventive and therapeutic actions. On the other hand, biomarkers will also be useful to detect people susceptible to developing Alzheimer's, predict their prognosis, monitor the progression of the disease and the efficacy of treatment; in addition to enriching future clinical trials as surrogate markers.

As explained by Dr. Suárez-Calvet, “blood biomarkers are one of the great discoveries in Alzheimer's research in recent years, and from the BBRC we participate directly in their study to be able to apply them in routine clinical practice. Currently and thanks to the reference test, the lumbar puncture, we compare the results to see its effectiveness. Our goal is to ensure that in the future the detection of Alzheimer's is early, easy and accessible, even with people without symptoms”.

Recently, the team of Dr. Suárez-Calvet, with the encouragement of the “la Caixa” Foundation, have detected that glial fibrillar acidic protein (GFAP) is a very precise biomarker to diagnose the initial phases of Alzheimer's disease in the blood. This finding, still in the research phase, will improve the diagnostic precision of the preclinical phase of Alzheimer's through a blood test, combining the detection of the GFAP biomarker with others recently discovered.

“All these recent scientific advances bring us closer to the end of Alzheimer's. In the new laboratory of the Pasqual Maragall Foundation, traslational research will be carried out to develop biomarkers, with the aim of discovering new therapeutic targets and providing a better understanding of the molecular mechanisms of Alzheimer's and other neurodegenerative diseases”, concludes Dr. Arcadi Navarro, director of the Pasqual Maragall Foundation.

To finance the laboratory equipment, the Pasqual Maragall Foundation has started the campaign 'News for memory' to raise funds. Through a video, the story of four relatives of people with Alzheimer's is told, focusing on a unique characteristic of these patients: their inability to remember recent events in their lives, but their persistent memory of important news from the past. With this image, the campaign seeks to encourage donations to achieve a headline that is never forgotten: create a laboratory that allows early detection of Alzheimer's with a simple blood test.