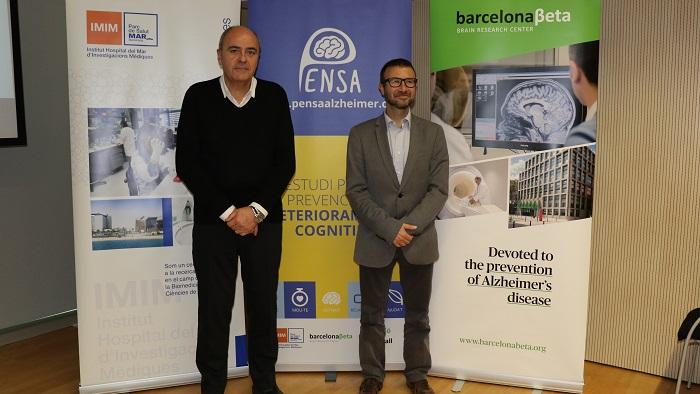 Researchers from Hospital del Mar Medical Research Institute (IMIM), led by Dr. Rafael de la Torre, and the Barcelonaβeta Brain Research Center (BBRC), led by Dr. José Luis Molinuevo, have started the recruitment of participants for the PENSA Study. It is a clinical trial of prevention that will follow, for a year, 200 people who have memory complaints, a stage that may precede Alzheimer’s disease.

The aim of the project is to study the evolution of the participants and the impact of the application of a multimodal intervention program in the lifestyle habits and the ingestion of epigallocatechin gallate (EGCG), a natural compound of green tea. In previous studies, this component has shown positive effects on the cognitive function of people with Down syndrome, in combination with a cognitive stimulation protocol.

The participants will be divided into four groups. They will receive EGCG or placebo and, in addition, two of the groups will have healthy lifestyle recommendations while the other two groups will participate in an intensive lifestyle change program that includes diet, physical activity and cognitive stimulation.

Those interested in participating should complete a form through the website www.pensaalzheimer.org, where a first screening of the possible participants will be made. The selection will be done by Barcelonaβeta Brain Research Center from Pasqual Maragall Foundation, the Neurology Service from Hospital del Mar together will primary care centers of the Àrea Integral de Salut (AIS) Barcelona Litoral Mar.

The participants must be from 60 to 80 years old, have a good physical condition to be able to carry out the tests and to notice some memory problems that some time ago they didn’t notice. It is also important that they live preferably in Barcelona, since they will have to attend the regular on-site visits programmed in the study.

The researchers will do personalized follow-up and control of the participants. In the first stage, they will monitor their lifestyle habits to see their starting point. Physical activity and dietary habits will be controlled. “Then, they will have some objectives to meet, both of diet and physical activity, and a cognitive stimulation program”, explains Dr. Rafael de la Torre, Director of the Research Program in Neurosciences in IMIM.

An app for smartphones has been designed that will allow the researchers to monitor the diet habits, physical activity, social interaction and mood throughout the entire intervention. The app allows individualized monitoring of the fulfillment of the intervention and adapts the demand of the challenges. At the same time, it favors and reinforces the linkage with the participants by sending messages to participant’s mobile phone. The intervention includes weekly attendance at the gym, nutritional follow-up, activities to enhance cognitive stimulation and psychoeducational support.
The aim of the project is to verify whether these interventions can improve the cognitive function before the onset of the first symptoms of Alzheimer’s disease. As Dr. De la Torre says, “we know risk and protective factors, which are modifiable. Therefore, if the program has effects on cognitive abilities of the participants, it will open the door to new studies to deal with early stages of this disease”.

For this part, Dr. José Luis Molinuevo, Scientific Director of Alzheimer’s Prevention Program of the Barcelonaβeta Brain Research Center, highlights that “as researchers who are studying Alzheimer’s disease, we are betting on prevention studies, as we know that one of every three cases are attributable to modifiable risk factors”. However, apart from the benefits that the trial on cognitive abilities of the participants, Dr. Molinuevo points out that “PENSA study could also contribute to improving general health of participants, since personalized actions on diet and exercise directly affect cardiovascular risk factors”.

In July, Dr. Molinuevo presented this study in Chicago, in the United States, at a symposium of the World Wide FINGERS initiative, which is dedicated to the promotion of primary prevention projects for cognitive impairment and dementia. PENSA is part of this international consortium and is financed with 1 million dollars by Alzheimer’s Association of the United States.