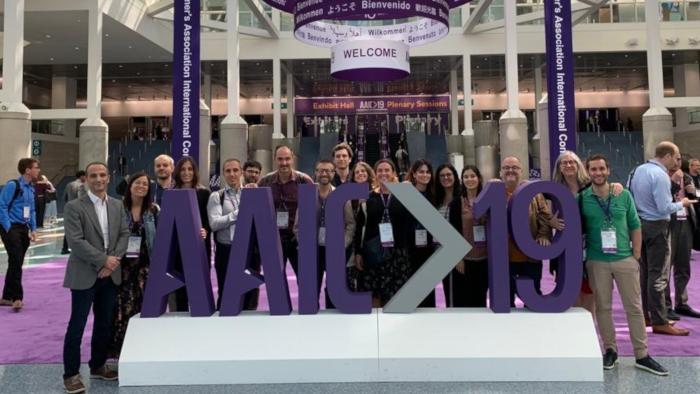 17 BBRC researchers attended the Alzheimer’s Association International Conference 2019, the largest international meeting on Alzheimer's and other dementias research, held in Los Angeles from July 14 to 17. The scientists presented some of the latest advances in the Alpha Study and the Alzheimer's Prevention Program at BBRC. In total, they made 8 oral presentations and 14 posters, in addition to the different meetings in which the Prevention Program Director has participated.

More than 20 papers on the latest advances in neuroimaging, the role of the Apoe-e2 and Apoe-e4 genes, and the relationships between pollution and Alzheimer's, symptoms of insomnia and cognitive performance or the validity of the information provided by informants to predict loss of cognitive ability, contrasted through amyloid PET; among others.

The scientific director of BBRC’s Alzheimer's Prevention Program, Dr. José Luis Molinuevo, was especially active. Already in the conferences prior to AAIC, he talked about the EPAD and AMYPAD projects at the Alzheimer's Disease Neuroimaging Initiative (ADNI) meeting and presented the Alfa + study at the 2nd Annual ACT Biomarkers Meeting 2019.

In addition, in the opening day of the congress, Dr. Juan Domingo Gispert offered a talk about the new amyloid beta protein thresholds identified at BBRC and Dr. Marta Crous-Bou made a presentation on the impacts of bilingualism and multilingualism on cognition, brain structure and Alzheimer's biomarkers.

These are just some of the examples of the tight schedule of the team of BBRC researchers who have participated in this global event. A meeting with a program full of presentations by the world's leading scientists in Alzheimer's research, more than 6,400 professionals from all over the world, and spaces for pooling the most recent scientific findings.