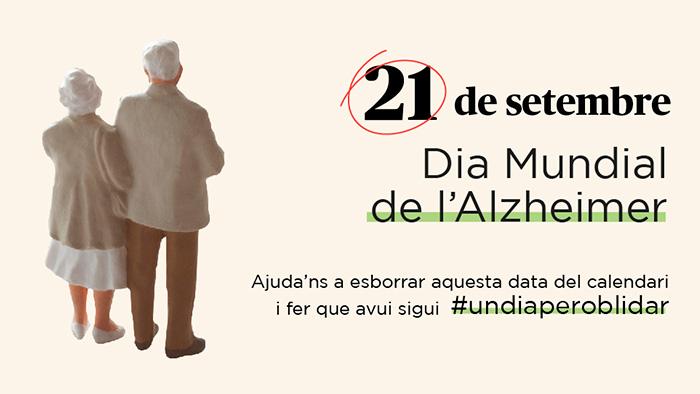 On World Alzheimer's Day, we want to make visible the need to continue allocating resources to erase this date from the calendar.
Share: Compartir a Twitter Compartir a Facebook Compartir a LinkedIn + Compartir per WhatsApp

Another year, World Alzheimer's Day arrives, a date that the Pasqual Maragall Foundation wants to erase from the calendar, because if we make September 21 #adaytoforget, we will have achieved a world without Alzheimer’s.

Until that moment arrives, it is necessary to influence the numbers, Alzheimer's, dementia and other neurodegenerative diseases associated with age, they are one of the main causes of mortality, disability and dependency.

Without an effective cure that modifies the course of dementia and Alzheimer's, health and care systems could collapse in the future.

For all this, it is necessary to make visible the need to continue allocating resources to Alzheimer's disease.

At the Pasqual Maragall Foundation, we work tirelessly to change these figures and modify the course of a history that has not yet been written.

- The WHO places the number of people affected in the world at 50 million, with 9.9 million new cases each year, a figure that could triple in 2050, surpassing one and a half million people in Spain.

- In addition, a conservative estimate places the annual cost of the disease at 21,000 million euros, 24,000 per affected person per year and it must be borne in mind that in more than 80% of cases, it is the family that takes care of the person with Alzheimer's and assumes 87% of the cost.

The entity was born with the conviction that the only way to prevent the disease, and delay the appearance of the first symptoms, is with more and better research, a commitment that we develop through our research center, the Barcelonaßeta Brain Research Center (BBRC), which this year celebrates ten years of solid history.

One of our greatest assets is the Alfa Study, a unique research platform formed by a cohort of more than 2,700 healthy people who have altruistically contributed to Alzheimer's research for 10 years and which is supported by the "La Caixa" Foundation.

The decision to focus research efforts on the preclinical phase of the disease, at a time when the scientific community was concentrating on the clinical phase, as well as to characterize the Alfa participants meant opening new avenues of research. Thanks to this courageous bet, we have made a key contribution to the development of the current criteria used worldwide for the identification and early detection and precise diagnosis of Alzheimer's disease based on the analysis of biomarkers.

Our desire to find a cure for Alzheimer's has led us to launch the new Biomarkers in Fluids and Translational Neurology laboratory, equipped with ultra-sensitive technology that will focus its research on early detection of Alzheimer's with an analysis of blood. In this sense, this technology has opened up a new avenue of research because it will allow us to analyze the 4,000 samples from the participants of the Alfa Study. We can analyze the past with today's tools. A journey through time that can give us the keys to discovering what we never knew about Alzheimer’s.

All these advances have been possible thanks to the support of our social base, partners, patrons and collaborating companies and, as it could not be otherwise, by the brave commitment to talent. This is why, in our commitment to advance research and achieve a future without Alzheimer's, this year we have convened the first edition of the Pasqual Maragall Researchers Programme. These grants will support translational research projects focused on Alzheimer's or other age-related neurodegenerative diseases. Endowed with a total of €1,600,000 in this first call and up to €800,000 per project, they become the most important private aid programme in Spain specifically aimed at researching these diseases.

From the Pasqual Maragall Foundation, however, we know that Alzheimer's is a disease that must be approached from different strategic perspectives. That is why, during these years, we have collaborated with the administrations involved to support and push research. We have also promoted different initiatives with other entities to claim that the fight against this disease is a priority in public policies and that the necessary efforts are made to have the tools to prevent and cure it. Among these actions, this year stands out the Commitment for a future without Alzheimer's, promoted together with other institutions.

It has been 15 years since we started this journey and our commitment to ending the disease remains firm. Discovering everything we never knew about Alzheimer's will lead us to realize the purpose of our founder: "nowhere is it written that this disease is invincible". Because if we know the disease better, we will be able to beat it and make September 21 an #adaytoforget.

You too can join our commitment. Help us continue working to defeat the disease and discover everything we never knew about Alzheimer's.