Outstanding participation of the BBRC in the XVIII Spanish Biometrics Conference 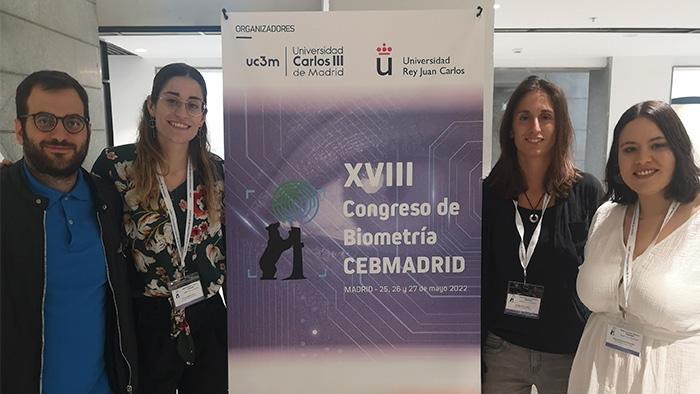 The Neurobiogenetics team at the 18th edition of the CEBMadrid Biometrics Congress.
Share: Compartir a Twitter Compartir a Facebook Compartir a LinkedIn + Compartir per WhatsApp
Congresses and events

The 18th edition of the CEBMadrid Biometrics Congress, organized by the Department of Statistics of the Carlos III University and the Department of Computer Science and Statistics of the Rey Juan Carlos University, had a prominent participation from the BBRC. During the conference, which took place from 25th to the 27th May, researchers from the Neurobiogenetics team at the Pasqual Maragall Foundation’s research center presented three papers and a scientific poster.

On Wednesday, May 25, Dr. Natàlia Vilor-Tejedor gave a first talk entitled Multivariate Analysis and Modeling of Multiple Brain Outcomes. Let’s MAMBO! (in neurogenetic studies), where she explained how to address and improve the analysis of how genetics influences brain studies. She also chaired a session on statistical software.

During the second day of the conference, the group participated in two other talks: the first, by researcher Patricia Genius, was entitled Exploring quantitative brain features associated with high genetic predisposition to Alzheimer's disease using Compositional Data Analysis. This intervention presented a recent study of how joint structural changes in the brain are influenced by another genetic predisposition to Alzheimer's disease. The second talk, given by researcher Blanca Rodríguez-Fernández during a special session for young scientists, was entitled A comparison of Mendelian Randomization methods for assessing causal effects on complex traits, and presented methodologies used to capture relationships between biomarkers of biological aging and neurodegeneration and aging processes.

In addition, researcher Armand Gonzalez presented a poster on a comparison of statistical methods for classifying people into groups of extreme biological aging, which is being used in the BBRC’s HeBe-ERC project.

The full program of the conference can be found at this link.