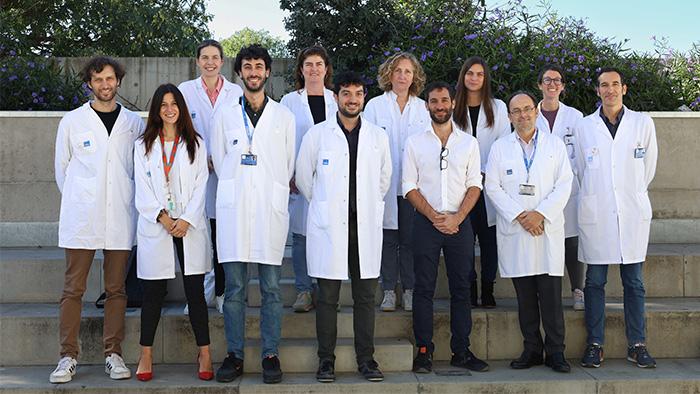 The researchers analysed the presence of nine variants of the Tau protein in blood samples from people from the cohort BIODEGMAR.
Share: Compartir a Twitter Compartir a Facebook Compartir a LinkedIn + Compartir per WhatsApp
Research and scientific results

Researchers from the Hospital del Mar Medical Research Institute (IMIM-Hospital del Mar), Hospital del Mar, the Barcelona Beta Brain Research Centre (BBRC), a research unit from the Pasqual Maragall Foundation, and the University of Gothenburg, Sweden, have validated several Tau protein measurements in the blood for diagnosing Alzheimer's disease. The work has been published in the leading journal in the field, Alzheimer's & Dementia, and is a fresh step towards providing tools for the early diagnosis of this degenerative disease. It is the first time that the usefulness of these nine blood biomarkers for diagnosing Alzheimer's has been compared in daily clinical practice.

One of the highlights of the study is the fact that these nine possible biomarkers, all variants of the Tau protein, have been studied at the same time and using the same samples. The samples come from the BIODEGMAR cohort of patients with cognitive impairment being monitored by the Neurology Service at Hospital del Mar. Specifically, the blood of 197 people with various pathologies, not only Alzheimer's, has been analysed, which has added specific value to the study, as it is representative of the clinical reality that can be found in a hospital.

"The conclusion is that we really do have blood biomarkers that can be very useful for diagnosing Alzheimer's disease in everyday clinical practice. However, these cannot yet be incorporated into day-to-day practice nor can they replace the standard test, the lumbar puncture and cerebrospinal fluid analysis", explains one of the main authors of the study, Dr. Marc Suárez-Calvet, a neurologist and researcher in the Physiology of Cognition and Alzheimer's Prevention research group at the IMIM-Hospital del Mar and head of the Fluid Biomarkers and Translational Neurology Group at the Barcelona Beta Brain Research Centre (BBRC). These results will also make it possible to "improve the diagnosis of patients with cognitive problems and better choose which people should undergo the gold standard test, which is still the lumbar puncture", he adds.

The patient samples were sent to the University of Gothenburg, where they were divided up to be analysed in different laboratories, which did not know the pathology of each patient. This allowed comparable results to be obtained. In people with Alzheimer's disease, the data obtained was compared with their cerebrospinal fluid samples obtained via lumbar puncture. This confirmed that some of the Tau protein measurements in blood were able to detect Alzheimer's with an accuracy close to that of the gold standard test, i.e., lumbar puncture. As such, they can be used as diagnostic markers, even in the early stages of the disease.

"For the first time, we have been able to perform a comparative analysis of all these blood biomarkers at the same time", explains Dr. Marta Milà-Alomà, one of the main authors of the research and also a member of the Fluid Biomarkers and Translational Neurology Group at the BBRC. "We have studied the discriminatory capacity of each of these nine immunoassays and compared them with the reference test, the lumbar puncture. Our results indicate that four of them will potentially be useful in the future for everyday clinical practice", she says.

Dr. Albert Puig-Pijoan, co-author of the study, neurologist at Hospital del Mar and IMIM-Hospital del Mar researcher, indicates that this study will not supplant lumbar puncture as the gold standard test for diagnosing Alzheimer's disease. "In the short term, lumbar punctures will still be necessary, but it is clear that these results pave the way to applying this less invasive blood test so that we can better select which patients should actually undergo a lumbar puncture. On the other hand, it could be very useful for diagnosing Alzheimer's in patients in whom we cannot perform a lumbar puncture or other tests with biomarkers that are more difficult to access", he explains. In the same vein, Dr. Jaume Roquer, who is also an author of the study, head of the Neurology Service at Hospital del Mar and coordinator of the Neurovascular Research Group at the IMIM-Hospital del Mar, points out that "We are relatively close to having, in people with cognitive impairment demonstrated through appropriate neuropsychological assessment, a positive blood biomarker that indicates a high possibility of Alzheimer's disease."

Researchers from the CIBER on Frailty and Healthy Ageing (CIBERFES) and the biomedical diagnostic and imaging network, dibi, also participated in the study.