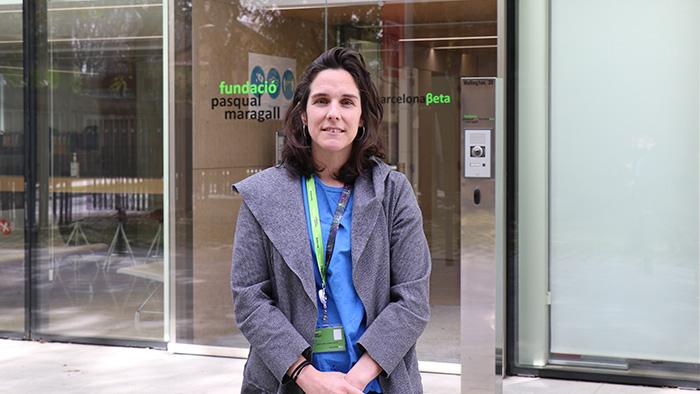 Dr. Marta del Campo has been appointed Director of the BBRC fluid biomarkers platform with the responsibility of developing, validating and implementing blood biomarkers for the early detection of Alzheimer's, in collaboration with the research group led by Dr. Marc Suarez-Calvet. Blood biomarkers are a very promising field of study for implementing detection tools that in the future will help predict Alzheimer's in its earliest stages in an inexpensive and non-invasive way.

Dr. del Campo has a degree in Biology from the Autonomous University of Madrid, a master's degree in Biotechnology and a doctorate in medicine with a specialization in Alzheimer's Biomarkers from the VU University medical center (VUmc) in Amsterdam. She has worked on different projects related to the discovery of new biomarkers in biofluids. Her main interest lies in understanding the pathophysiological mechanisms that give rise to the various types of dementias, and translating this knowledge into possible therapeutic targets and new diagnostic tests. A clear example of international studies in which she participates are the PRIDE and bPRIDE projects (the latter promoted by the EU Joint Program – Neurodegenerative Disease Research (JPND)) where she analyzes cerebrospinal fluid and plasma from patients with different types of dementia to identify their biological fingerprint and translate it into optimal biomarker tools. Currently, Dr. del Campo is also a researcher in the Neuropharmacology Group at CEU San Pablo University.

The Pasqual Maragall Fondation research center aims to become a benchmark laboratory for biomarkers for both Alzheimer's and other neurodegenerative diseases. In the new infrastructure of the Foundation, tests of existing biomarkers will be carried out in cerebrospinal fluid, blood and other fluids, in addition to supporting the research of various institutions, health centers and industry. The entire process will be carried out in the platform, from the identification of the candidate biomarkers to the development trial and, finally, the future implementation in clinical practice, thanks to having the latest ultra sensitive technologies and the high scientific and technique of the research team, all aimed at improving the diagnosis of Alzheimer's.

"For me, this appointment means a real challenge, since it allows me to develop innovative research projects that can have a real impact on people," explains Dr. del Campo. "We will carry out very transversal studies, involving different sectors of academia and industry, in order to ensure that scientific findings reach society."

The launch of the BBRC's Platform for Biomarkers in Fluids has been possible thanks to the crowdfunding campaign "A news to remember" which aimed to raise €150,000 to equip the new laboratory with ultrasensitive machinery. The initiative was quite a success and €263,127 were raised from private donors and companies. We greatly appreciate the contribution of all the people who have collaborated to make it possible.