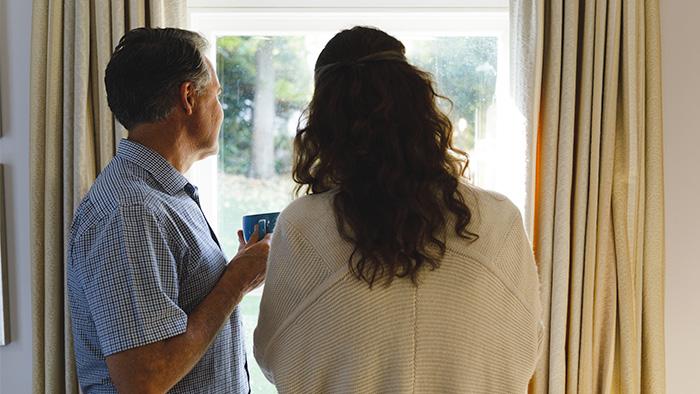 The research indicates that the perception of stress played a very important role in the relationship between these symptoms.
Share: Compartir a Twitter Compartir a Facebook Compartir a LinkedIn + Compartir per WhatsApp
Research and scientific results

A research team from the Barcelonaβeta Brain Research Center (BBRC), research center of the Pasqual Maragall Foundation, has discovered that symptoms of anxiety and depression during confinement due to Covid-19 were related to the intensity of subjective cognitive decline (SCD), meaning having the feeling of experiencing cognitive impairment despite showing normal performance on neuropsychological tests. In addition, the research indicates that the perception of stress played a very important role in the relationship between these symptoms, which suggests that regulating stress levels could reduce the symptoms of people who experience SCD. The study has been published in Alzheimer's Research & Therapy, and has had the participation of 250 people from the Alfa Study, promoted by the ”la Caixa” Foundation.

Before the onset of cognitive decline in neurodegenerative diseases, some people may experience subjective cognitive decline. "These people have the perception of experiencing cognitive impairment despite the fact that the results of the neuropsychological tests show normal performance", explains Dr. Gonzalo Sánchez-Benavides, a neuropsychologist and researcher at the BBRC and one of the main authors of the study.

The research supports the results of recent BBRC studies linking symptoms of anxiety and depression during lockdown with biomarkers of Alzheimer's. This new analysis suggests that anxious-depressive symptoms are also among the most common recurrent affective symptoms related to subjective cognitive decline in older adults. "It has been shown that the Covid-19 pandemic can worsen the mental health of clinically vulnerable populations, such as those with subjective cognitive problems and, therefore, their clinical prognosis", details Müge Akinci, researcher at the BBRC and first author of the study.

The research findings show that, in addition to a greater intensity of subjective cognitive impairment, amyloid beta protein positivity is also associated with a greater presence of symptoms of anxiety and depression during confinement due to Covid-19. These results are independent of the levels of these symptoms prior to confinement. "This association is important because it may lead to a worse clinical prognosis in people at risk of Alzheimer's after the pandemic," says Dr. Eider Arenaza-Urquijo, study researcher and team leader at the BBRC.

The association of the intensity of SCD with anxiety and depression was mediated by the perception of stress, which suggests that stress regulation could be a way to reduce affective symptomatology in the population with subjective cognitive decline in the face of stressors. In addition, greater anxiety-depression symptoms have been observed during confinement due to Covid-19 in certain population groups. Above all, a greater intensity of these symptoms has been observed in younger participants, women and those with a lower educational level (measured in formative years).

For the study, 250 participants were selected from the Alfa Study, promoted by the ”la Caixa” Foundation. This group, with an increased risk of developing cognitive impairment and dementia due to Alzheimer's disease, completed the Hospital Anxiety and Depression Scale (HADS) during confinement, in addition to other questionnaires related to perceived stress, resilience, worries during confinement due to Covid-19 (access to primary products, self-protection materials, economic situation) and changes in lifestyle (duration and quality of sleep and diet). Prior to confinement, an amyloid positron emission tomography (PET) scan had also been performed.

A new BBRC study links Alzheimer's biomarkers to symptoms of anxiety and depression during confinement by Covid-19
What effects does confinement have on mental and brain health?