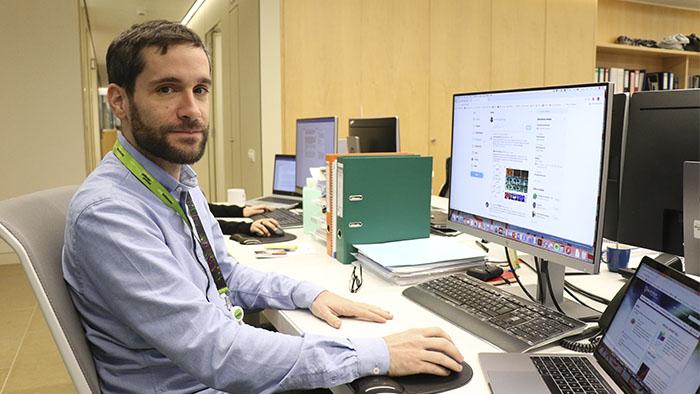 Dr Marc Suárez-Calvet, neurologist and member of the Clinical Research, Biomarkers and Risk Factors group at the Barcelonaβeta Brain Research Center (BBRC), finalised the Marie Skłodowska-Curie European grant in January. He joined BBRC in 2018 to start the BioAlfa project in collaboration with the University of Goteborg. Two years later, we talk to him to know about his experience and the current state of the project.

What is your assessment of your experience as a Marie Skłodowska-Curie fellow?

My assessment is very positive because it is one of the most prestigious European grants, so just being awarded is very important indeed. The Marie Skłodowska-Curie grant helps you with your personal and scientific development and is the bridge to become a principal investigator. For instance, one of the things that I did last year was to apply for an ERC Starting Grant, which is the next step of the European scientific career.

You have been leading the BioAlfa project over the last two years. What is the current state of the research project?

Following the Skłodowska-Curie philosophy, BioAlfa is a high risk - high gain project, which means that it is an ambitious and groundbreaking study with a risky but very original hypothesis that if proven, it could represent an outstanding advance. The aim of the project is to find blood factors in humans associated with brain aging or rejuvenation. All the assays have already been validated and tested in blood samples from the umbilical cord, teenagers, young adults and elderly. Now it is time to measure these factors in blood samples from our Alfa + cohort, which is composed of cognitively unimpaired individuals from 45 to 75 years old. Once we had these tests performed, we will check whether having certain levels of rejuvenating factors in the blood is associated with a better cognition or brain structure, or vice versa, if having certain levels of aging blood factors is associated to a poorer cognition and brain.

When will the results be available?

We will have the first results this year, but they will be public later on, as we will have to publish them first in a scientific journal. BioAlfa is a long and ambitious project that goes far beyond the Marie Skłodowska-Curie grant.

Tell us about your experience working at BBRC and the University of Goteborg.

After 5 years working and living in Germany and the UK, I came back to Barcelona and to do clinical research, thanks to the Marie Skłodowska-Curie grant. On the one hand, BBRC has a great potential and it is very rewarding to be participating in this moment in which the institution is rapidly growing. On the other hand, Kaj Blennow’s lab at the University of Goteborg is probably the most important one in the field of biomarkers of neurodegeneration. I have learned a lot and I have several scientific collaborations with them, besides the BioAlfa project.

What are you doing now after the European fellowship?

I have started the Spanish grant ‘Juan de la Cierva’. As I said before, I will continue working on the BioAlfa project, but I will also carry out other research projects within the Clinical Research, Biomarkers and Risk Factors group at BBRC, led by Dr José Luis Molinuevo. I am analysing cerebrospinal fluid biomarkers in the Alfa + cohort, supervising my first PhD student, and seeing patients at Hospital del Mar once a week.

BioAlfa is funded by the Marie Skłodowska-Curie Grant nº 752310, in the framework of the Horizon 2020 Research and Innovation Program of the European Union. The Banc de Sang i Teixits, the Walnuts study of the ISGlobal, and “la Caixa” have also collaborated in the study.