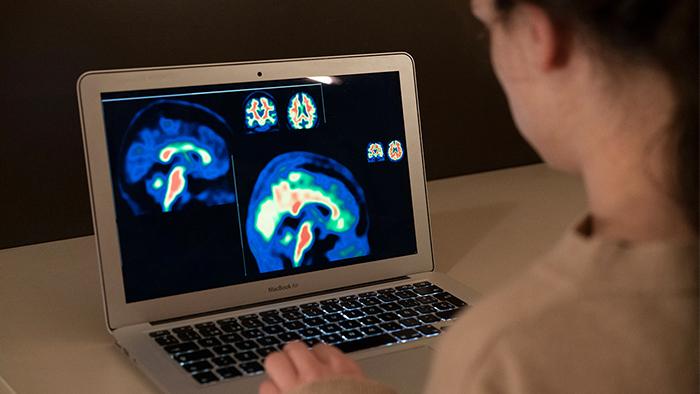 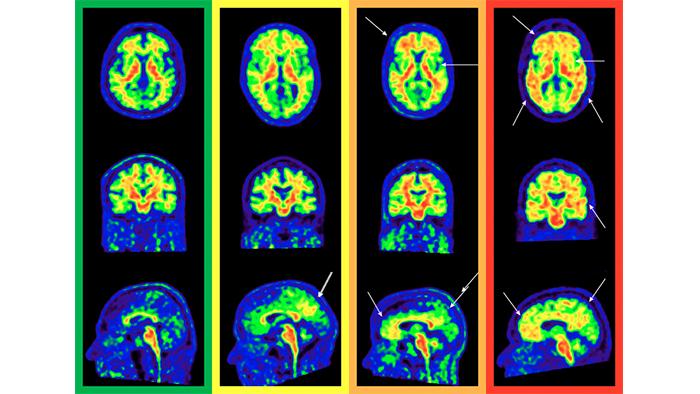 Example of cerebral PET amyloid of different pathological classification according to the visual method proposed in the study (green is without pathology, yellow, grade 1; orange, grade 2; and red, grade 3). The arrows indicate the extent of the pathology at different levels.
Share: Compartir a Twitter Compartir a Facebook Compartir a LinkedIn + Compartir per WhatsApp
Research and scientific results

European researchers from the Amyloid Imaging to Prevent Alzheimer's Disease (AMYPAD) consortium analysed whether the method used in clinical practice to diagnose Alzheimer's disease, with Positron Emission Tomography (PET) using the Flutemetamol tracer, is also capable to detect the earliest stages of the disease. The study concludes that this system, based on visual read, is useful for distinguishing the initial phases, and proposes a new methodology for determining the extent of the pathology in different regions of the brain.

"Our work provides a method which is easily applicable to clinical practice and will allow a more sensitive detection of the earliest stages of Alzheimer's, similar to what we do in the field of research", says Dr. Juan Domingo Gispert, principal investigator of the study and head of a work package of the AMYPAD consortium and the Neuroimaging group of the Barcelonaβeta Brain Research Center (BBRC).

The study was presented and received the Junior Faculty Award at the International Conference on Alzheimer's and Parkinson's Diseases, held virtually these days, and published in the European Journal of Nuclear Medicine and Molecular Imaging.

PET is a neuroimaging technique that, used with a specific tracer, can detect beta-amyloid protein in the brain. This protein is the first measurable hallmark of Alzheimer’s disease and can begin to build up abnormally in plaques up to two decades before the onset of symptoms.

In the field of research, this technique provides a wealth of information about the presence and extent of these plaques, and allows to quantify numerically, with a scale called ‘Centiloid’, the stage of the disease of the participant or patient. On the other hand in the clinical field, professionals make a qualitative visual assessment of the images, following established protocols that lead to a single result: positive or negative.

More than 500 participants from Barcelona and Amsterdam

The study involved, on the one hand, 352 participants between 45 and 75 years old, cognitively unimpaired and at different risk of developing Alzheimer's disease, from the Alfa Study of the BBRC, promoted by “La Caixa” Foundation. On the other hand, 145 participants with dementia or mild cognitive impairment enrolled in the Amsterdam Dementia Cohort. To confirm the validity of the results, researchers also analysed 28 post-mortem cases.

According to the first co-author of the project and researcher at the Amsterdam University Medical Centre , Lyduine Collij, “the results of this research were possible thanks to the collaboration of three AMYPAD partners, the pooling of the two cohorts, which cover the whole spectrum of the disease, and the participation of experts in the visual reading of the amyloid PET”.

Additionally, the second co-author and researcher at the BBRC, Gemma Salvadó, points out that “this research network made it possible to draw up a series of recommendations to more easily detect the accumulation of beta-amyloid protein visually, and to classify its extension in regions of the brain that we know affect the Alzheimer's disease earlier, such as the medial orbitofrontal cortex or precuneus”.

The researchers of the consortium shared in open access this new method, in which they also explained how the results could be extrapolated to the centiloid scale used in research, as well as detailed, for example, the best guidelines for detecting the extent of amyloid accumulation in different regions of the brain.

As Dr. Gispert points out, "a more accurate classification will allow a better selection of participants for clinical trials and, in the near future, will be essential when treatments are available for the early stages of Alzheimer's disease”.

The next step for the members of AMYPAD is to investigate the prognostic capacity of the amyloid PET technique in a cohort of nearly 800 participants from across Europe.

The AMYPAD project is funded by grant number 115952 of program 2 of the Innovative Medicines Initiative, which is a joint initiative of the research and innovation program of the European Commission Horizon 2020 and the European Federation of Pharmaceutical Industries and Associations (EFPIA).