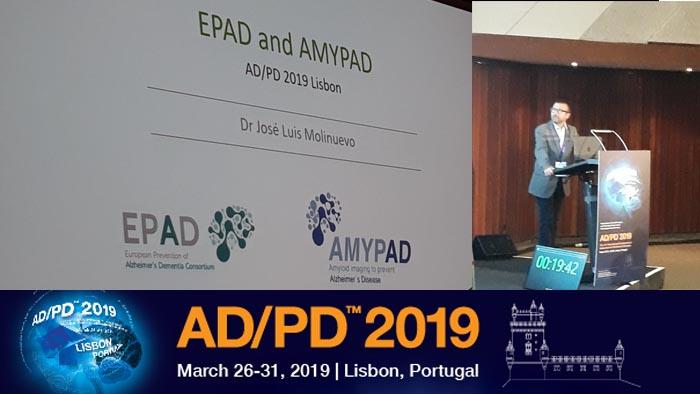 The 14th International Conference on Alzheimer’s & Parkinson’s Diseases (AD/PD 2019) is joining world’s leading experts on these diseases, from the 26th to the 31st of March in Lisbon. The scientific director of Barcelonaβeta Brain Research Center (BBRC), Dr José Luis Molinuevo, will participate in several sessions and symposiums associated with the conference, and researchers and research support staff from BBRC and the Pasqual Maragall Foundation will present in a poster the project ‘Life Soundtrack’.

On Thursday, Molinuevo will participate in a symposium on blood biomarkers, with a lecture about how plasma biomarkers may inform clinical practice, and will chair a second symposium on fluid biomarkers. Finally, on Friday, he will lead a symposium organized by Biogen and Eisai, centered on an interactive patient case study and the pathological obstacles challenging an early diagnosis of Alzheimer’s.

Besides Molinuevo’s activity, researchers and research support staff from BBRC and the Pasqual Maragall Foundation will present the project ‘Life Soundtrack’ in a poster session. The poster includes a link to a video which shows how a group of high school students from Sabadell (Barcelona), mentored by BBRC researchers, designed an intervention to assess the impact that a personalized musical selection have on people with dementia.

More than 3,500 participants are expected to attend the AD/PD conference. Check out the scientific program of the conference on this link.